Selma Blair and Her Adorable Son Arthur Step Out 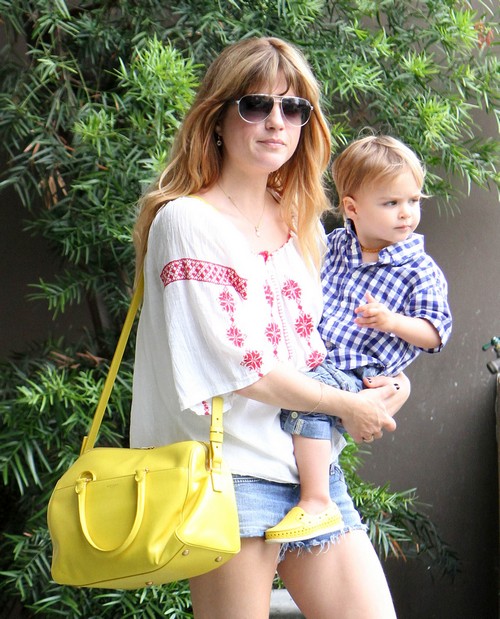 Enjoying the great summer weather former Anger Management actress Selma Blair stepped out with her almost 2-year-old son Arthur today [July 11, 2013] in Los Angeles, CA.  Selma looked boho chic in her daisy dukes shorts and white top, while Arthur was all decked out in jeans and a checked shirt.  Arthur’s docker are so cute and they match money Selma’s purse.

Selma was also showing off her new lighter colored hair.  It looks perfect for the summer.   She posted a message on her twitter account after she dyed it, “Fixing. Takes time. Years of black hair dye. Yowzah”

Arthur’s father is fashion designer Jason Bleick since 2010.  Arthur was born in 2011 and in September 2012, Selma and Jason announced that they had separated after two years.  She did reunite with Jason this week to take her son Arthur on a family day at a petting zoo in Studio City, Calif.

Selma was recently axed from Charlie Sheen’s hit FX comedy Anger Management after being on the show for one year.  The reason of her departure is not known.  Charlie told producers he did not want to shoot further scenes with Selma because she allegedly made comments about his poor worth-ethic, on set.  Selma claims that Charlie had a thing for her and she was not interested.

Enjoy the photos of Selma and Arthur!

Ali Landry Gave Birth To Her Third Child, A Son