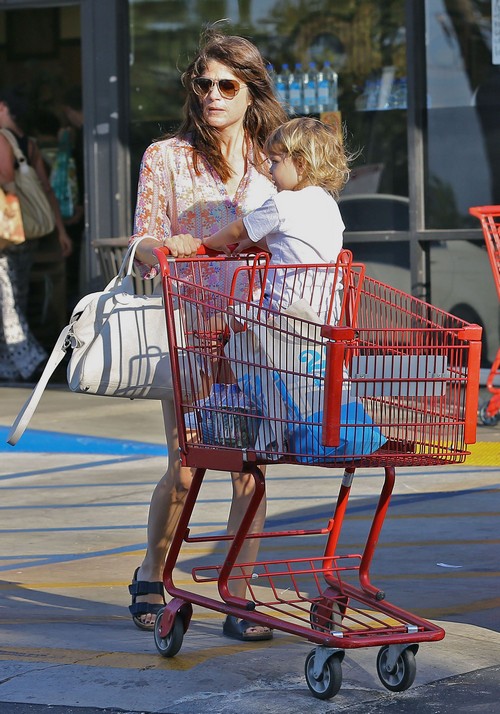 Selma Blair‘s life has been a bit of a whirlwind over the last few years with both her career and personal life being in a constant state of flux. In 2013 she was fired from Charlie Sheen’s Anger Management and within a few months she landed a plum role in Amazon’s comedy pilot Really.  Selma also split from her husband, fashion designer Jason Bleick and they share custody of a son named Arthur Saint Bleick. Things between the two appear to be pretty amicable and they seem to have worked out an arrangement that works well for them both. It’s always nice when a Hollywood couple can split and really put their kids’ interest first.Just yesterday the “Hellboy” actress was spotted out and about with her just-turned 3-year old son. The two were seen in LA shopping at Trader Joe’s where Selma looked like any other young mom. Cutoff jean short, sandals, shades and an adorable passenger in her shopping cart.  Most photos of Arthur give the impression that Selma has her hands full with the adorable boy who celebrated his 3rd birthday on July 25th.

Selma has enjoyed a long film and television career since hitting Hollywood in 1995 but motherhood seems to be the role that suits her the very best. The actresses’ new comedy Really is supposed to begin streaming its’ entire first season this month. Will you be tuning in to catch her in the role of Joanna? Are you a fan of live streaming shows or do you prefer having to tune in the good old fashioned way- with your television?  Are you inclined to tune into a show via Amazon or Netflix if it means seeing a favorite like Selma Blair performing again?  Tell us your thoughts in the comments below!