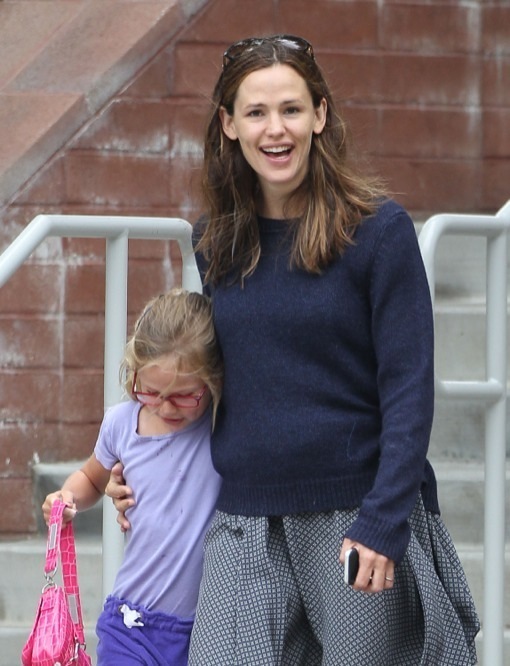 Is that a tiny bump?

I’ve refused to report on this story as of yet, because I doubted that Jennifer Garner is pregnant. In my opinion, the actress has been very clear that her now 1-year-old son, Samuel, with Ben Affleck was her last baby.

Although, I must admit on her latest outing at Violet‘s school on Wednesday, Jennifer certainly appeared to be trying to hide something. She wore a very loose navy blue sweater over a flowing dress that screamed, “I”m a celebrity and I am pregnant, but not telling the pubic yet”.

The mom of three just signed a deal to be the face of the Fall/Winter MAX MARA Eyewear.

“My style is pragmatic. I like to wear garments that have a real luxurious texture and feel good against the skin,” she told, adding, “I like the size of the JBag. I like that it’s big enough to carry anything you want to stuff in there, but it’s small enough that you won’t lose your keys!”

The sunglasses campaign debuts in November.

Alyson Hannigan and Husband Alexis Denisof Out Shopping With Their Daughters