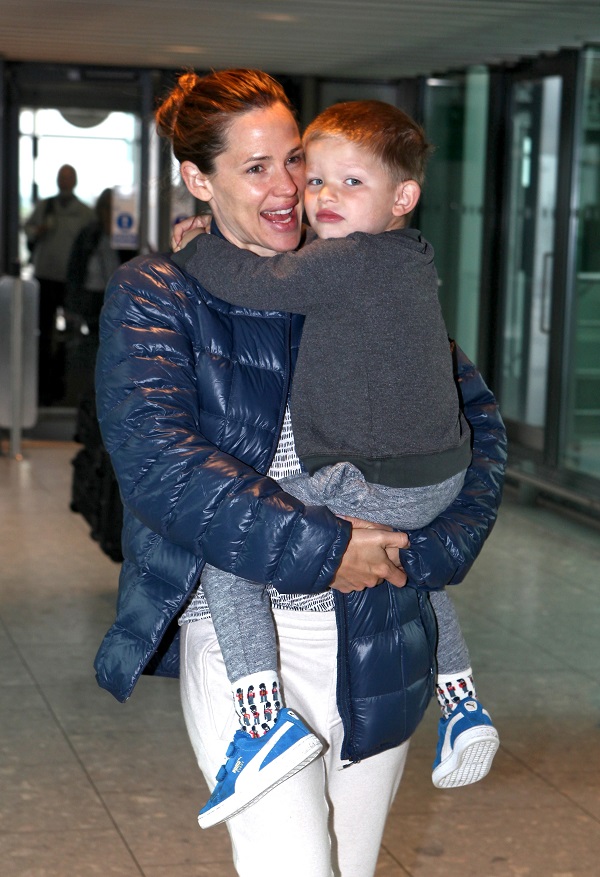 Jennifer Garner and her youngest child Samuel were spotted leaving London, England on Thursday June 2.  Jen was toting Samuel through the Heathrow Airport as they prepared to board their plane and head back home to Los Angeles, California.

Recently the media can’t get enough of Jennier Garner, not only because of her overly publicized divorce from Ben Affleck, but also because of her return to the big screen.  After taking a few years off to play mommy, Jennifer Garner has begun accepting movie roles again.  And, her soon to be ex-husband Ben Affleck is busy working hard too.

Samuel’s dad Ben is currently filming the new movie ‘Justice League: Part One,’ which features not one but TWO popular superheros – Batman and Superman.  While the comic fan world waits impatiently for the film’s production to be complete, Jennifer Garner and her kids have been jetting back and forth from London and Los Angeles, and keeping Ben company on location.

It’s really unclear what is going on with Jennifer Garner and Ben Affleck these days.  It seems like every other week the tabloids are reporting that they are moving forward with their divorce, or reconciling.  All that matters is that Samuel seemed to be a happy little boy at the airport, completely unaware of his parents’ marriage issues, and Ben and Jen have been spotted on tons of family outings in Europe and their kids seem to be having a blast!