Alyson Hannigan and Husband Alexis Denisof Out Shopping With Their Daughters 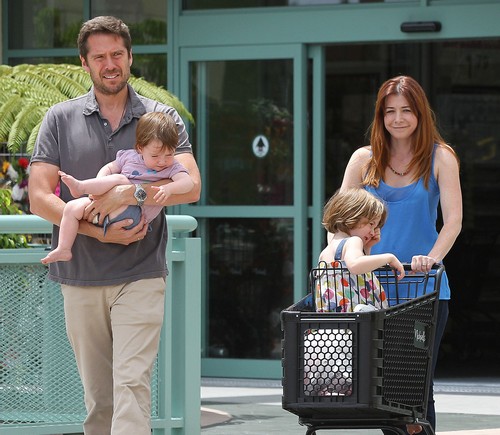 How I Met Your Mother actress Alyson Hannigan and her husband of 10-years Alexis Denisof were out shopping today [07/26/13] with their adorable daughters, four-year-old Satyana and 14-month-old Keeva. Alyson met her husband on the set of the TV show Buffy The Vampire Slayer.  The happy family were shopping at Michaels in Los Angeles.  I guess they were feeling creative today.

Alyson has said she loves crafts and tries to get the girls involved.  “I have a crafting room and Sati loves going in there and taking stuff out of the bins. I hold hope that she’s going to be a crafter someday,” she said,

Alyson is getting to spend some quality time with the family while she is getting  a break from How I Met Your Mother.  Season 9 of the popular show is set to start filming soon.  Alyson recently headed to the 2013 Comic-Con in San Diego to promote the show’s final season.  She joined her costars Josh Radnor, Jason Segal, Cobie Smulders, Neil Patrick Harris and creators Carter Bays, Craig Thomas and Pamela Fryman. She tweeted on her twitter account, “Comic Con here we come! At least that’s what the people that dropped us off in this kitchen TOLD us >:/”

The new season of the show will premiere Monday, September 23, 2013.