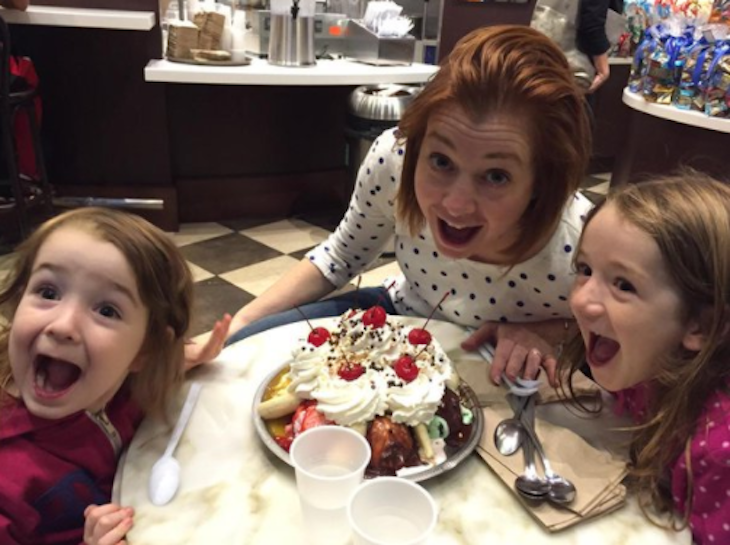 Alyson Hannigan might be one of the most recognizable names in television, but she’s still trying to adjust to her life as a Hollywood mom. In fact, the former ‘How I Met Your Mother’ star recently admitted that she sometimes finds it tough raising her two daughters in Hollywood. She even calls it an ‘odd situation.’

Alyson has two daughters, 8-year-old Satyana and 5-year-old Keeva with her husband, Alexis Denisof. And according to the actress, her daughters still don’t get it whenever a fan asks for her autograph of her picture whenever they are out and about. Of course, she also gets a lot of attention from the paparazzi whenever she’s in Los Angeles, too.

The celebrity mom told the Today Show in a new interview, “It’s an odd situation. I have told them that a lot of people know who I am because of what I do (for a living). I made the analogy, ‘Imagine Strawberry Shortcake was walking down the street. You might want to take a picture with her. It’s sort of like that!’”

And while she’s still trying to explain the complexity of her job and position as a celebrity in the entertainment world, Alyson says that she tries her best to answer all of her daughters’ questions – both big and small – on a daily basis. But when she can’t, she has them ask their dad instead!

She continued, “Every day they ask these incredible questions and you don’t want to mess up with your answer! Their questions are usually honest, legitimate questions and sometimes I don’t have an answer for them right away. There’s always the ‘Go ask your dad’ answer, which will at least buy me a few more minutes!”