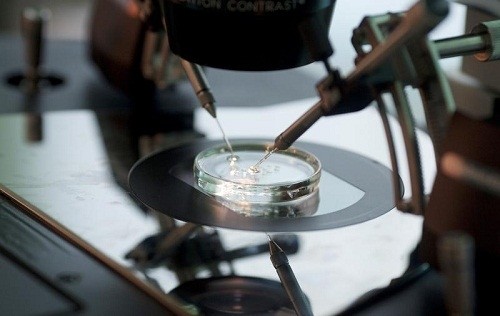 Marybeth Scheidts, 36, and her 41-year-old husband, David Levy, had tried for five years to have a baby before she became pregnant. Artificial insemination failed three times and more genetic testing would have cost the couple at least $6,000. Instead they were offered a spot in a clinical trial that would give them access to the next generation sequencing and they jumped at the opportunity.  It’s a good thing that they did too because the trial was a success for them and brought 7-week old Connor Levy into their lives. The baby, born May 18th in Philadelphia is the first to be born out of this new IVF screening process.

Last Monday Dagan Wells presented his findings at the European Society of Human Reproduction and Embryology’s yearly meeting. Wells is a researcher at the NIHR Biomedical Research Centre at the University of Oxford. He  created the technique, which is used on women undergoing IVF as  It helps detect abnormalities in an embryo before it’s transferred to the uterus.  Wells also believes that the screening may cut the number of women who miscarry after IVF almost in half.

Ironically more than 80 percent of the embryos that are transferred to the uterus don’t actually make a baby. Researchers have been studying the numbers for years and are working to understand what exactly it is that makes the failure rate so high and how to reverse that.

In the meantime, Connor Levy is proof positive that some of the new screening techniques and advances in technology may really work. Would you consider IVF if struggling to conceive? Would you also be open to experimental treatments or screenings in your quest for a baby? Tell us your thoughts in the comments below!

Everybody Loves a New Baby – Especially a Royal Heir!