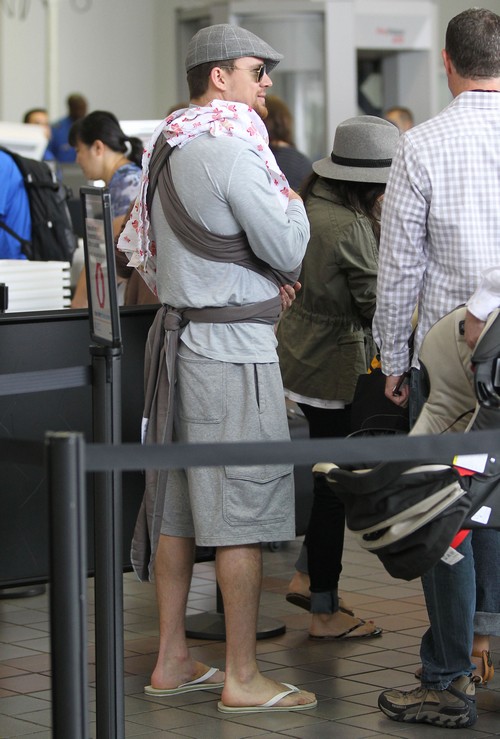 Channing Tatum and his wife Jenna Dewan were spotted today [July 7th, 2013] at LAX taking a flight out of Los Angeles.  Channing, showing that he is a modern father had their newborn daughter, Everly in a baby carrier and he was wearing her.  The two have been married 4 years July 11th, 2013, so perhaps they were heading off on an anniversary trip.

Everly is just over one-month-old, she was born May 31, 2013 in London England.  It is the first child for the couple.  Channing spoke to Letterman about being a new Dad saying, “Babies, I’ve never been so excited when they poop. I’m just like, ‘I’m in the game, give me the baby.’ It’s a whole game to see if I can change her before she cries and give her back to my wife.”

Channing kept his daughter close to his chest and kept her away from the paparazzi’s cameras.  It is obvious Channing is loving being a father.

Rather than sell Everly’s photos to a magazine, Channing and Jenna chose to post the first picture on his Facebook page on Father’s day with the message, “First Father’s Day with my girls.”

Isn’t he adorable?  All together now, ahhhhh!