Kim Kardashian Confirms She Is Pregnant With a Baby Girl 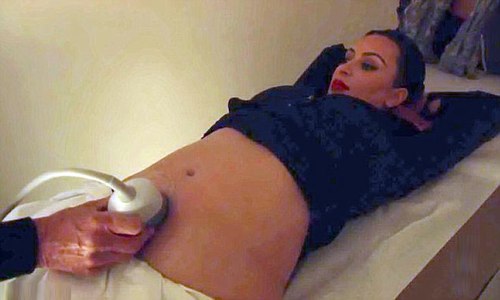 On Sunday’s season eight premiere of Keeping Up With the Kardashians, Kim Kardashian revealed she was pregnant with a baby girl.

Despite not being present during the big reveal, Kanye West was hoping for a baby girl says Kim.

“I’m so excited we’re having a girl,” she gushed. “Like, who doesn’t want a girl? They’re the best. And I know that’s what Kanye has always wanted. He wanted a little girl.”

Throughout the episode the reality star stressed over her work obligations, house-hunting, and being pregnant while still going through divorce proceedings with ex Kris Humphries. But all that changed as soon as she found out the gender of her baby.

“I finally feel like I’m at a really good place being pregnant,” she said

To catch more of Kim’s pregnancy tune into Keeping Up to The Kardashians each Sunday on the E! network.

Our friends over at Bohomoth have all the details of Kim’s baby shower and the funniest photo you have ever seen of how Kim and Kanye will look in several years, head over to see it you won’t be disappointed, CLICK HERE …