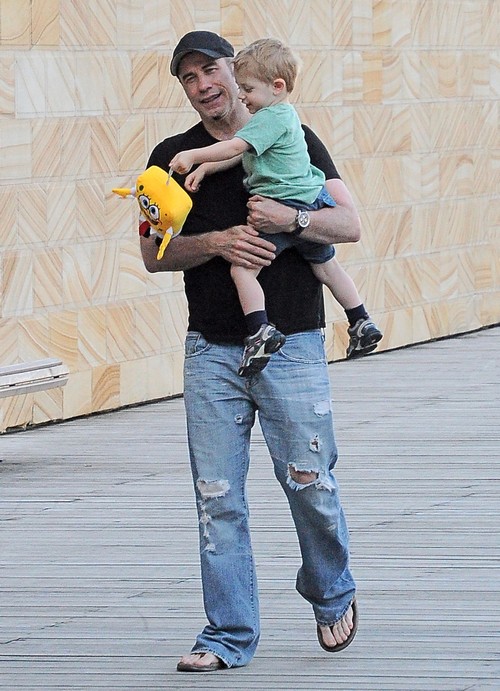 John Travolta stepped out with his adorable three-year-old son Benjamin in Sydney, Australia on April 18, 2013. John waved to the camera while Benjamin was having a fun time swinging his Spongebob Squarepants doll around!  John was causally dressed in torn jeans, black top and flip flops.  John still has that tiny growth of hair on his chin, I guess he thinks it looks good, wrong!

John was out exploring the sites with Benjamin who clutched on to his daddy.  Although John’s wife Kelly Preston and their 13-year-old daughter Ella are in Australia, they decided to skip the outing.

The family have been in Australia since early April, but just arrived in Sydney.  John who is a pilot was there to help Qantas officially celebrate its new Emirates partnership and uniforms.  John hosted the  event with model Miranda Kerr and Aussie songstress Tina Arena.  The lavish gala was held inside the A380 hangar.

Their Sydney trip follows a family trip to the Gold Coast last week to celebrate Ben’s birthday at Currumbin Wildlife Sanctuary.  People at the sanctuary praised the Travolta family saying, “He was just so lovely and down to earth. He was making jokes about our little boys and he didn’t act like he was anything special.”