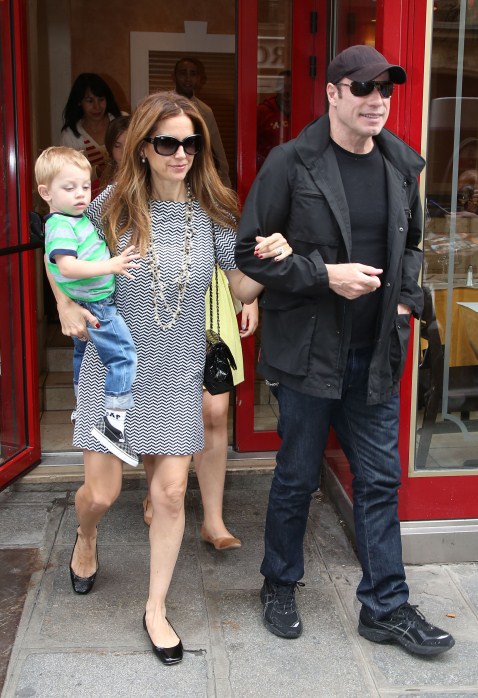 John Travolta and his wife Kelly Preston were spotted celebrating their 20th wedding anniversary with their son Benjamin in Paris, France on Wednesday.  The family looked happy as they exited Pizza Pino’s restaurants on the famous Champs-Elysées boulevard. Travolta who tried to go incognito in a baseball hat with black sunglasses was dressed warmly as he held out his arm for Preston. Preston who carried 20-month-old Benjamin also wore black glasses with a white and black striped dress with flats. Benjamin looked cute in a green and grey striped shirt and jeans.

The two have tried to stay out of the spotlight since Travolta’s gay sex scandal made headlines. Unfortunately, for them the rumors just don’t seem to want to go away.

As of recent, a pilot who claims to have been Travolta’s gay lover in the ’80s, said the Hollywood star admitted that he was still into men, even after marrying his wife Kelly Preston.

“We were making small talk when suddenly, I blurted out, ‘So, John, tell me. Now that you’re married, do you still prefer men – or women?’ He looked me straight in the eye and said, ‘Well, Doug, I still prefer men!,” the pilot claimed to the The National Enquirer.

What do you think? Are Travolta and Preston happily married? Are people just trying to take advantage of Travolta?