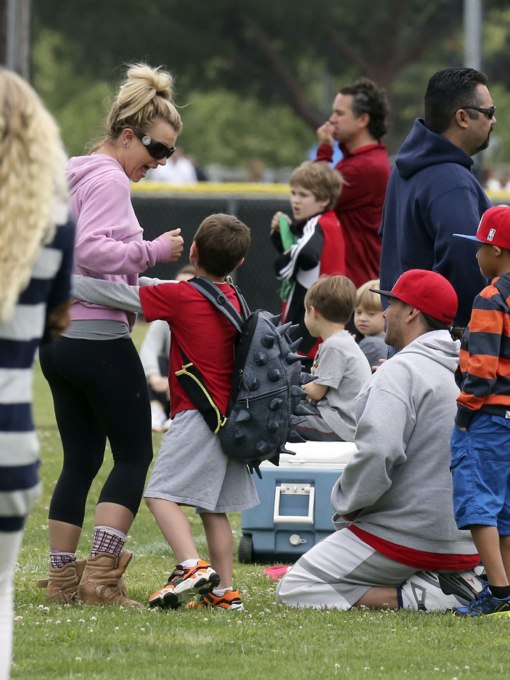 The pop singer looked comfortable in a pink SOMB brand hoodie and brown velcro trainers before changing clothes into a yellow and black top with a flowy white sweater. She brought the romance novel The Goddess Inheritance by Aimee Carter but spent her time rooting on her sons and laughing with a fellow mother.

Doting dad Kevin Federline consoled Jayden’s aid after  he hurt himself in the match.

Meanwhile, Britney revealed in the May 2013 issue of Elle magazine that she loves singer Adele.

“Her voice is just not like any other voice out there. It draws the emotion out of you. A lot of her songs kind of put me in a trance. We were both at the VMAs, and they were like, ‘Do you want to meet Adele?’ And I was like, ‘Um, yes!’ She was even better than I imagined, in person – she’s so incredibly down-to-earth. You can tell she hasn’t gotten caught up in that pop music machine thing – which is easy to get caught in – and she hasn’t just listened to what executives were telling her to do. All of her stuff is hers, and that’s really amazing,” she told.

Head over to our friends at Girls Talkin Smack to find out what 5 celebrities parents are strict!