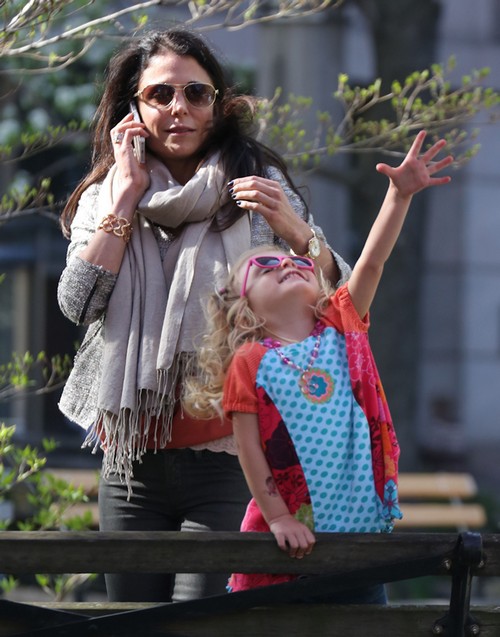 Reality star Bethenny Frankel took a break from her divorce drama to spend some down time with daughter Bryn Hoppy yesterday [April 24th, 2013]  in New York City.  The girls took some time out to stop for ice cream at a park and even though Mommy Bethenny was on the phone  Bryn still looked like she was having a great time.  Bryn was dressed in a super cute print dress, necklace and pink sunglasses while Bethenny was keeping it casual in jeans.

Bryn and her ex Jason Hoppy are still trying to work out details of their separation.  They are both asking for primary custody of daughter Bryn, as well as child support and medical and dental expenses.  They also both want ‘exclusive use and occupancy’ of their marital residence.

Really these two could work this out if they wanted to. Bethenney has often said that Jason is a fantastic father and let’s be honest here, work is truly her first love. That’s not to say that she doesn’t love Bryn, but she really needs to split custody in order to continue having the best of both worlds. This is really a case of them being too stubborn and angry to do what’s best for their daughter.  Just saying…….