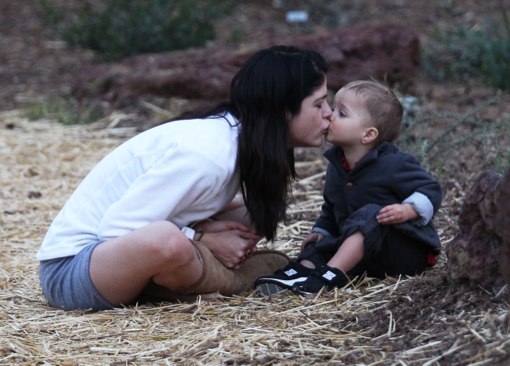 Selma Blair was pictured enjoying a playdate with her son Arthur at a park near their home in Studio City, CA Tuesday (Jan. 22).

The actress wore a white sweater, shorts and UGG Boots while playing in the dirt with her 18-month-old.  During their playtime, Blair doted on Arthur by giving him hugs and affectionate kisses.  Blair will have to keep balancing motherhood with her career because FX’s hit comedy Anger Management in which she stars alongside, Charlie Sheen has just been renewed for a second season.

In the past, the 40-year-old has made no secret that she has struggled to balance her two responsibilities.

“Somehow I was just hanging on. But then it caught up with me – totally – and, since then, I’ve just fallen apart.” she told.“I need to get myself back together so I can go back to work so I can pay for a house for this baby.”

When Breastfeeding Fails: A Mother’s Guilt