Liev Schreiber Teaches His Sons How To Ride Bicycle 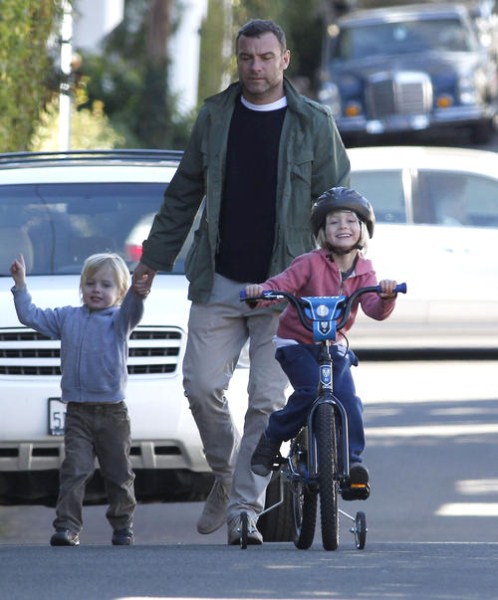 Liev Schreiber is a cool dad. He is. Recent pictures show he’s even cooler than we thought. On the 12th of January (yesterday), Schreiber and his two sons – Kai, 4, and Sasha, 5 – were spotted out on a Brentwood, California street riding bicycles. There were still training wheels attached, but hey, we all have to start somewhere, don’t we? Schreiber’s wife, Naomi Watts, was nowhere to be seen however. According to Schreiber, his kids are “biker boys” and he wants to have them ride bicycles without the encumbrance of training wheels.  He explains, “They are not off training wheels yet. The problem is they are not riding their own bikes [and] would rather ride with me or with Naomi. So we have this great bike where the three of us can all sit on. It’s fun, but it’s time to get them on their own. I’m trying to get them to park so they can practice.”

We’re glad Schreiber and Watts are there to assist their kids in becoming little Evel Knievels.  Schreiber concludes, “They have the best time and they would rather go on a bike than any other form of transportation.” What do you think Celeb Baby Laundry reader? Can you remember the first time your child rode a bike? Let us know your experiences in the comments below.

Chris Daughtry Knows What Is Important In Life