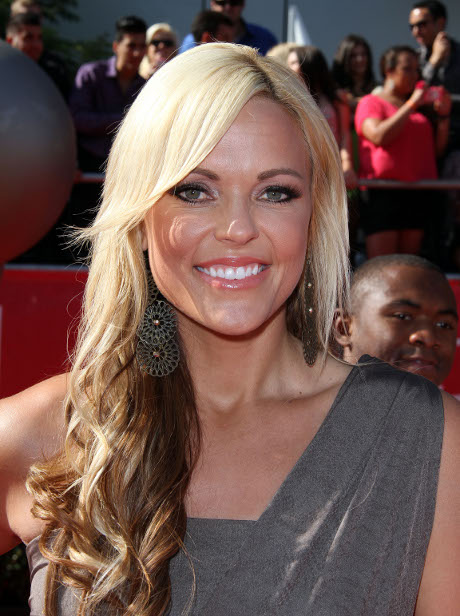 Olympic softball star, Jennie Finch has started off 2013 a little sweeter than most of us. She and husband, Casey Daigle, welcomed their third child, daughter Paisley Faye early this morning. The 8lbs, 1 oz. Baby joins big brothers, Diesel Dean, 18 months and Ace Shane, 6 in the family.

Finch and Daigle married in 2005 after both of them were winding down careers in softball/baseball. Finch is one of the most decorated and famous women in softball history. She was a longtime pitcher for the U.S. National team and helped the team to win a gold medal at the 2004 summer Olympics and then the silver medal at the summer Olympics in 2008.

Since her Olympic days Finch has gone on to co-author a sports book and has appeared on The Real Housewive’s of Orange County as well as The Celebrity Apprentice. She also makes media appearances and mentors kids. Finch officially retired from softball in 2010 and said it was mainly because she wanted to be more hands on and involved with her family. She was craving normalcy.

Like many celebrity moms before her, in 2011 Jennie began mommy blogging for People Magazine.  That’s where she has been discussing the ins and outs of pregnancy and parenting for the past two years.  Jennie is thrilled to finally have a little girl to bond with. Are you a fan of the name Paisley?  Is it something that you would name your daughter or is it totally out of the question for you? Tell us your thoughts in the comments below!

Liev Schreiber Teaches His Sons How To Ride Bicycle