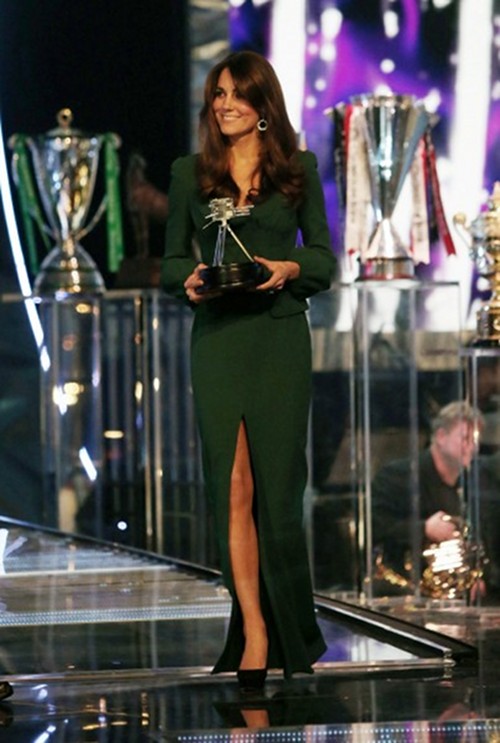 Kate Middleton has kept out of the public eye ever since announcing her pregnancy two weeks ago. The expecting mother was in hospital for three days at King Edward III’s private facility before returning home to Kensington Palace. A few days after moving home, Prince William joked that morning sickness should be called “all day and all night” sickness, leading us to believe that Kate would not be showing her baby bump or bangs until after the holidays, at least. But the Duchess of Cambridge is nothing of not resilient–as a member of the royal family, she has to be made of thicker stuff, otherwise she’d burn to a crisp under the tabloid speculation!

Last night, Kate stepped out in a stunning green Alexander McQueen gown to present the BBC Sports Personality of the Year Award with David Beckham. Kate admitted to Paralympic athlete Martine Wright that being on stage was scary, but was all smiles. A source reported to US Weekly, “A decision wasn’t made until the very last minute due to Catherine’s health. She doesn’t feel well enough to carry out a lengthy engagement but was determined to pay tribute to [Team GB athletes].” We choose to take this as a sign that Kate’s pregnancy is healthy, and the Queen and her watchdogs have let Kate out for a bit to have a nice evening. We can’t wait to see more pictures with a prominent bump–that forest green color is slimming!