Vanessa Minnillo Lachey: “If Nick Could Nurse Camden He Would” 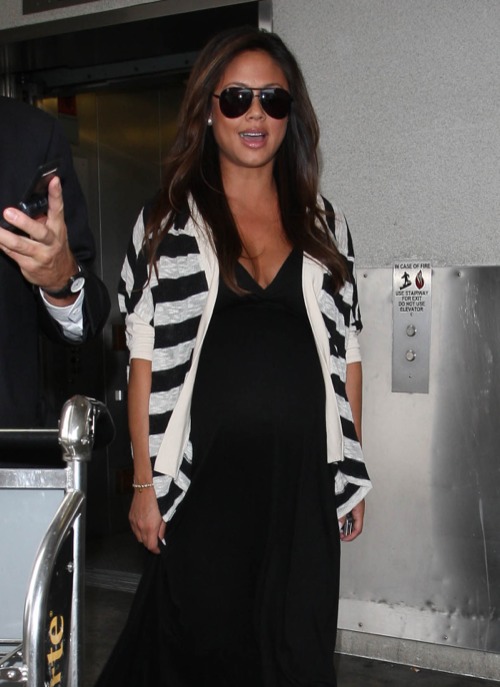 Vanessa Minnillo who gave birth to son Camden John in September knew Nick Lachey would be a good dad.

In an interview with SheKnows.com, the actress tells that when they started dating she was looking out for her daddy potential.

“That is one of the things I looked for in him when we were dating,” she told. “Not only how he is as a man and a husband, but how he will be as a father.”

“All of my hopes and dreams have come true and he is awesome,” the new mom says. “I was actually joking earlier that if Nick could nurse Camden he would! If he had boobs, he would do it!”

While he may not be able to manage the midnight feedings, the proud papa has perfected the art of cradling their little man.

“He literally can cradle Camden and swing him around and do, ‘Shh, shh, shh.’ He does that so perfectly because for the first couple of weeks I couldn’t bend … so Nick took that role and he is awesome at that!” Vanessa shares.

“My thing is the obvious. I’m the feeder. I’m his meal ticket. As soon as I’m done feeding him, it is Nick’s time.”

Vanessa admits she wasn’t prepared for the time-consuming task of meeting a newborn’s needs.

“I didn’t understand that they need to eat every two to three hours at first and then three to four a little after that. And that each feed can be up to one hour with the changing and the shushing and the swaddling,” she explains. “Sometimes we literally had 15 minutes between him falling asleep and then having to wake him for the next feed. I’m like, ‘This goes on 24 hours a day and no one told me about this part of it!’”

She adds that she is absoltely smitten with Camden and is still in shock.

“I am still in shock and we look at him and we are like, ‘We made this!’ I know it sounds corny and cheesy, but it is your love personified,” she says. “I love everything about being a mom — looking at him and seeing him and hoping and praying that he will be a gentleman and a good man and a supportive friend. All my hopes for him are through the roof.”