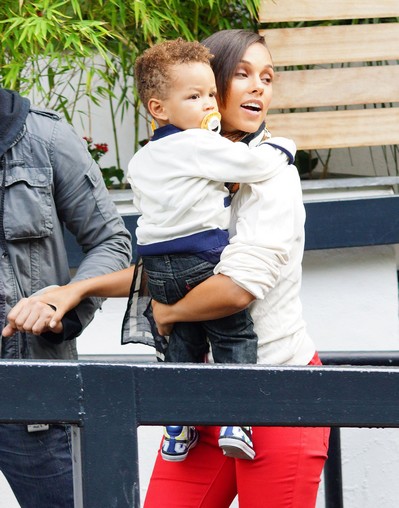 The vocal superstar Alicia Keys named her son Egypt, but unlike most Hollywood parents who invent quirky names to fit with their quirky lifestyles (Michael Jackson, anyone? Anyone? Bump), Alicia didn’t decide on her son’s name due to a whimsical fancy. The Grammy Award-winning superstar opened up to Complex magazine about the reasons behind why she named her son after an embattled country.

According to the star, “I took an important trip for myself to Egypt. There were a lot of things that needed change. I was not as experienced then, so I felt close to a breakdown. I went to Egypt, and I went alone. I sailed down the Nile and I saw the temples, the tombs, and the pyramids. It was powerful. It was very Cleopatra. When we found out I was pregnant, my husband said, ‘Egypt was such an important time for you. That really changed your life. Wouldn’t that be amazing as a name?’ Once he said that, I was like, ‘Yes.’

The platinum selling artist was also fundamentally changed by motherhood. According to Alicia, it was “about becoming a woman”. She described to the magazine in detail, “Motherhood was a big part of me breaking free. Before I gave birth to Egypt, there was a certain energy of wanting to fix things. Women want to clean stuff up before the baby comes. I refused to be in any circumstance that would give negative energy to this. That was what pushed me over the edge. It was becoming a woman. I was a girl, and now I’m a woman.

Alicia’s two-year-old son is not the only baby in the household, as she is also currently hard at work on promoting her brand new album (and artistic baby), Girl On Fire. Alicia has been quiet on the music front for the past few years, so a new release might give her a push in the right direction. Hey, if all else fails, at least she has a walking talking Egypt to keep her company on those lonely nights…

Would you name your baby after a country? Do you think celebrities are ludicrous and outrageous? What is your favourite name? Let us know your thoughts in the comments below.