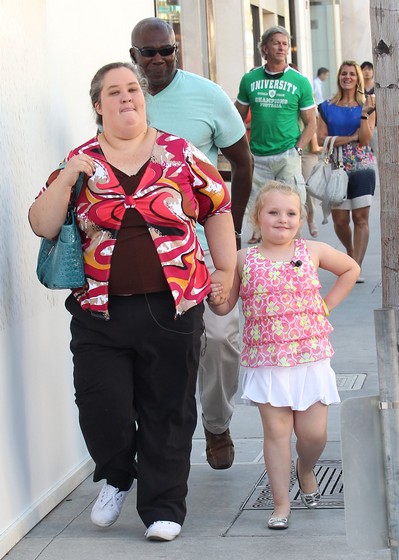 It looks like the second season of filming Here Comes Honey Boo Boo is off to a really rocky start! There is chaos in many forms that seems to keep interrupting filming and worse than that, the family is now at complete odds. Mama June Shannon isn’t a fan of pranks so when “Crazy Tony” Lindsey decided to chop the head off a snake and wear the rest of it coiled around him on Halloween, she freaked out completely. It was so bad that she demanded that filming be stopped.

June’s oldest daughter, Anna “Chickadee” Shannon has attached herself to a rich new boyfriend and claims to hate her mother so much that she’s planning to take her four-month old daughter and leave.

The most serious incident came when Lauryn “Pumpkin” Shannon got hit in the eye with a set of keys thrown by Mike “Sugar Bear” Thompson. According to The National Enquirer,

“Sugar Bear wasn’t trying to hurt hurt her. He thought Lauryn was going to catch the keys, but she missed. The keys struck her in the face and scratched her cornea. She covered her face with her hands and began screaming, and blood was flowing from cuts under her eye. June freaked out, shouting at Sugar Bear: “What did you DO?! You could have blinded her for life!” Lauryn was rushed to a local hospital and kept overnight, mainly because she was in shock. They were all terrified that Pumpkin would lose her sight. Thankfully, it all turned out OK, but they lost a whole day of filming.”

Now add to all of that the fact that Honey Boo Boo herself, 7-year old Alana Thompson has been having full blown meltdowns on camera. The young star has had to make the publicity rounds with June and her behavior has been embarrassing when not completely horrendous!

None of this bodes well for the future of the show. Do you think the family will hold it together well enough to continue filming or will the redneck fun be over before it ever really started? Tell us your thoughts in the comments below!