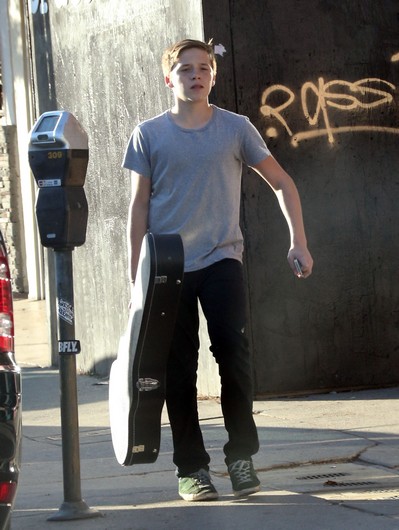 Brooklyn Beckham does not take after his dad, David Beckham, in the soccer department, but he does take after his mother, Victoria Beckham, in the music department. The 13-year-old superstar kid was seen attending guitar classes in Los Angeles, California on Monday, and he even took guitar lessons from The Wanted’s Tom Parker last month. Brooklyn is not only a future guitar superstar aficionado; he also has a heart of philanthropic gold.

According to a source at the Daily Star, “Brooklyn told his mom and dad that he didn’t want to receive presents for Thanksgiving this year. He said instead he’d like to donate them to people who need them more.” OMG, isn’t he just the cutest kid this side of a puppy? The insider continues, “Brooklyn asked one of the family bodyguards to take him to a Rite Aid store in Los Angeles so he could buy some first-aid kits to put in the charity parcels. He even persuaded his brothers Romeo, 10, and Cruz, 7, to give up their presents and pocket money for the homeless this year. The lads are planning to give big, fun packages to the local shelter.”

Brooklyn and his two brothers, Romeo, 10, and Cruz, 7, supported their dad at an LA Galaxy game earlier in the week, and were spotted out and about in Los Angeles. Their father’s most recent advertisement campaign for Breitling watches is expected to net a pretty dollar for the family – not that they need it – and their mother’s fashion, music, and personal empire has increased the family’s financial worth beyond that of Midas.

We think Brooklyn’s philanthropically oriented heart is an admirable trait. If only all kids in the world had his wise outlook, the world would be a much, much better place. What do you think? Do you think the Beckhams instilled this in their son? Or is it something he inherited further up the family tree? Let us know your thoughts in the comments below.