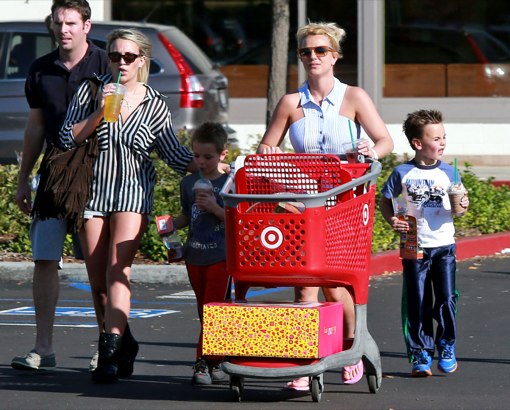 Britney Spears and her sister Jaime Lynn Spears were spotted taking her sons Sean and Jayden out shopping at Target in Thousand Oaks, Ca on Sunday (Nov. 25).

The sisters who enjoyed Starbucks drinks alongside the boys were joined by a bodyguard as they shopped for toys.

It is rumored that One Direction may perform at Spears’ upcoming wedding to fiance Jason Trawick after the group impressed her during a X Factor performance.

“Britney loved 1D on ‘The X Factor USA’ and told them backstage that she’d love them to sing at her wedding,” an insider told Popcrush. “They agreed, but said it would depend on their schedule. She’s told Simon Cowell she’s serious and he must make it happen.”

Gushing about their performance on the show earlier this month, Britney said:

“They swooned me, I loved them. They were amazing.”

Bethenny Frankel Enjoys a Day In The Sun With Bryn