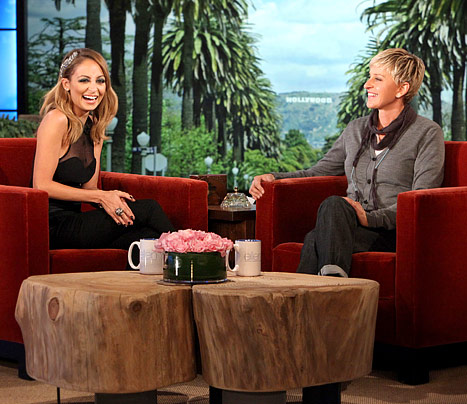 Nicole Richie and husband Joel Madden got a family dog!

Appearing appears on The Ellen DeGeneres Show,  the reality star turned designer  opens up about her family’s latest addition.

“We just got a puppy, a German Shepherd named Ero,” the mom tells on the episode which airs today. “He is 18 months.”

“This is our first family pet,” she continued. “He’s a great dog. I’ve only had him about a week but he’s so sweet.”

However, Richie admits its really Madden’s dog because she has no intention of picking up after Ero.

“I actually told Joel, ‘I don’t want to pick up after any thing ever again. I’ve got my kids so I’m going to let you do that.’ It’s his dog, but I like to, you know, snuggle. I like to hug him and kiss him.”

Though Sparrow “was really excited” to welcome the canine, Harlow “did not want a dog,” Richie admits.

“She’s very delicate. She doesn’t like anything disturbing her space. Delicate would be the best way to put it.”

According to Richie, Harlow may change her mind in time.

Be sure to watch the show today to see the full interview.

Kate Hudson Touches Down In Paris