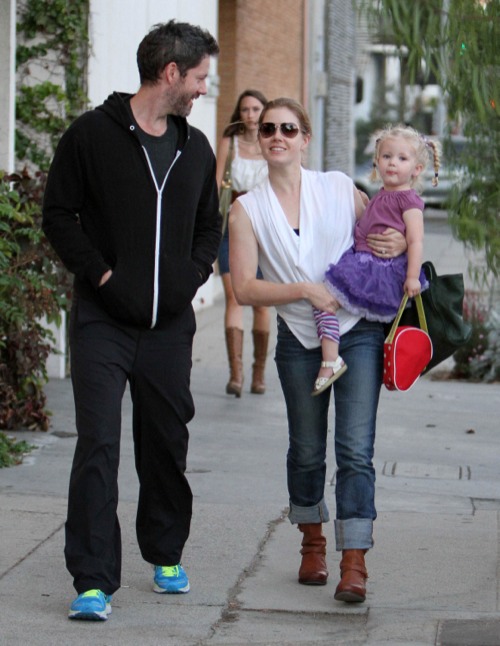 Amy Adams and her fiance Darren Le Gallo took their daughter Aviana out for lunch at the Little Next Door Restaurant in West Hollywood, California on Thursday.

The actress wore a white top, jeans and brown boots as she carried Aviana out of the restaurant. The two-year-old wore a purple shirt with a frilly skirt paired with matching tights and a red purse. Le Gallo was dressed all in black while he walked next to his two girls.

Adams recently told that she enjoys the challenges that come with being a mother and an actress.

“I love that balance. I had a talk show blitz the other day. I had three hours down, so I raced home, changed out of my nice clothes and we walked to Central Park (in New York City) and did the merry-go-round because I promised her we’d do it before we went back – and she remembers. And then we walked back,” The Enchanted star told USA Today newspaper.

The mother also revealed Aviana is a very strong-willed child and she doesn’t even like to be comforted by her mother when she is upset.

Recalling a flight when Aviana wouldn’t stop sobbing, she said: “It’s funny. She doesn’t like to be held when she’s upset. She’s very independent. This one woman kept going, ‘Why doesn’t she just pick her up?’ It’s like, ‘Do you know what would happen if I tried to pick my child up right now?’ She would lose her mind. I probably shouldn’t worry about it. I love my child.”

Alyson Hannigan Takes A Stroll With Her Daughters