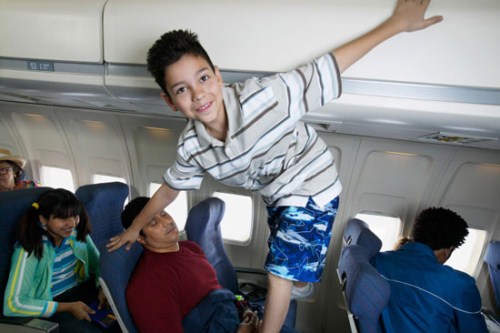 With the holiday’s quickly approaching families are starting to think about traveling plans.. okay, well most families probably already have it planned, but I am a procrastinator so I am just starting to think about holiday plans. I have flown very few times with kids and I have never flown with both my kids. So here are a few tips that I know of with flying (although I’m sure there’s tons more!)

Luggage & Carry on baggage:
Most airlines will let you check baby items free of charge at the check in counter; this does not include your child’s suitcase. It includes things like car seats, strollers, pack ‘n play cribs. As far as carry on items are concerned: As a parent you may have 1 diaper bag, 1 purse + 1 carry on bag, however, I don’t suggest it! That’s a lot to juggle. You should also be able to gate check any strollers/car seats combos. This means you will take it through security and take it to the gate of the plane and they will give you a ticket at the gate for your item. It will then be waiting for you at your destination right outside the plane again. This does include travel system stroller/car seat combos and single strollers.

Over 2 years old?:
Most airlines will require children over the age of 25 months to have their own seat, and unfortunately I have yet to find an airline who “discounts” that seat. It is optional if your child rides in a car seat during the flight or simply buckles into the seat. I have heard pros and cons to both situations and it’s up to the parents which they would like. Most airlines require birth certificates for any children traveling (usually within a certain age range) for proof of age- trust me you won’t be able to sneak your daughter on as an under 2 year old if she isn’t! They want proof! We almost didn’t get onto a flight because of it once and we couldn’t prove my son was less than 2 years old; I think we got the sympathy card since we were flying for a funeral and my husband was in the military at the time. However, I won’t be chancing it again!

Going through security:
Children are required to go through security points and it is not optional. However, they have secondary lines for kids so they don’t have to use the newer security machines. If you do not want your children going through the scanners make sure you let the security guards know so they can show you the alternative. All car seats and strollers and diaper bags have to go through the xray scanners also.

Traveling with baby items:
My kids never were able to breast feed so I was always forced to have formulas for my kids. Every time while traveling I was given flack about bringing water for his formula. They would make a big deal and tell me they had to test the water which is frustrating and stressful if you’re running behind. It’s nothing more than a dipstick but just be for warned they will want it to be tested. I even thought once that if I kept the bottles totally sealed then they wouldn’t hassle me, nope, not the case. It definitely wasn’t the end of the world just throws off the flow if you’re not ready for it.

In the air:
My two biggest tips for getting ready to fly. I’ve flown twice with my son, once when he was really little and once when he was about 15 months old. The first time, as he was still on bottles, I fed him a bottle while we were waiting for the plane to load. Doing this ensured that he was SOUND asleep right as we hit the air and he slept the entire flight, it was amazing! When he was older and more bouncy we gave him a paci to help with the take off and again to try to encourage the nap. The second tip: Bring something chewy or something to suck on for kids when the plane starts to come down. Young kids won’t be able to tell you that their ears hurt so if you have something that requires them to make the chewing motion that will help with the popping. Our favorites are peanuts, pretzels or gummy bears (if your kiddos are old enough to have them!). As obvious, make sure that you have lots of extra games and fun stuff…or $6 for an in flight movie if your flight is long enough!

A few random things I’ve learned:
You will NOT be able to wear a baby carrier on the plane. You can wear it up until the point you sit down at which point you will be asked to complete remove it. Again not the end of the world unless you’re flying alone with a newborn for the first time and he’s sound asleep and you can hold the baby and get the carrier completely off with one hand, yes, nightmare. So, if you are flying alone, better to take the carrier off in the lobby of the airport where you have a bit more room to maneuver yourself and baby. Make sure your car seat can be on airplanes IF you are choosing to do that. If you need the measurements of the seats on the plane call the airlines. I know that our car seats would be too big for the airplane and that would not be something fun to find out once sitting on the plane. There will usually be a boarding call before everyone else for people with children so it gives you a chance to get settled before the masses come on.

As always when in doubt, call the airlines. I also suggest arriving earlier than normal to ensure that there are no hiccups.

Disclaimer: Please keep in mind that all of these tips are MY personal suggestions/experiences and might not be true for every airline. If in doubt check with the airline you’re flying to get their exact rules.