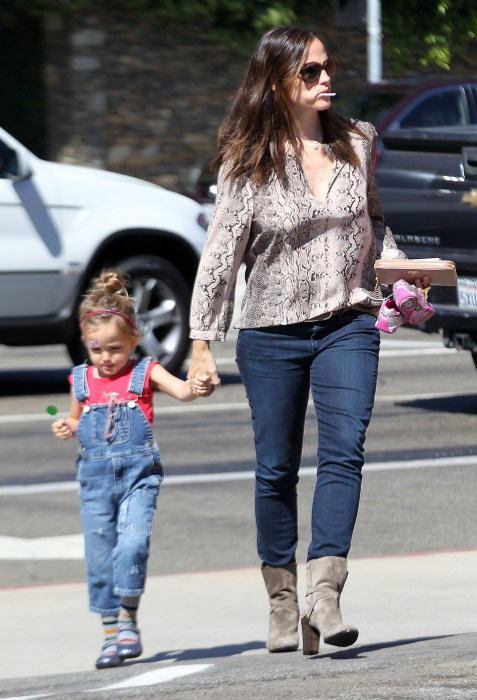 Jennifer Garner and her daughter Seraphina spent the day shopping in Los Angeles on Thursday. Garner and her three-year-old tot picked up a pair of shoes for her while at the Brentwood Country Mart.

Seraphina looked like a country gal in a red shirt with overalls as she sucked on lollipop and held her mom’s hand.  The Odd Life of Timothy Green actress looked slim just six-month after giving birth to son Samuel in jeans and a python-print blouse paired with pale boots.

During a promotional trip to New York last month, she told David Letterman:

“I have a six-and-a-half year old, a three-and-a-half year old, they’re girls. And then I have a boy and he is five months old. (It’s) like it’s some huge accomplishment, I switched the gender. He is so delicious.  I just have him with me on this trip to New York, I left the girls at home with their father. It is so easy, such heaven, just one little baby. Smiley happy, in the middle of the night, no problem, happy to see you.”

She also revealed how her daughters dote on their baby brother.

“They are so sweet with him. They really have been…. they want to dress him up in American girl doll clothes, but (they are) amazingly sweet. We didn’t let that happen,” Garner added.

Claire Danes Is Excited To Become A Mommy