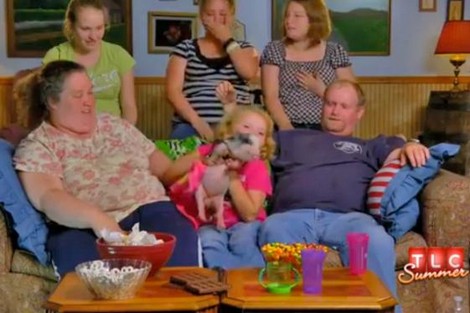 Honey Boo Boo‘s Mom June Shannon, is worried that one of her daughter’s fathers will come out of the woodwork and want a share of the pie not that the family is famous.  June Shannon had her four daughters: Anne; Jessica; Alana (Honey Boo Boo) and Lauryn with four different men.  Now that June and her clan are on television June fears that the daddies will want to see some of the money.

In touch print edition reports June recently heard from Jessica’s Dad.  “He hadn’t wanted to deal with Jessica for 15 years, and all of a sudden the show comes out, and he’s father of the year.”  He only reached out to his daughter because she was famous now.

Jessica just ignored her father but the incident has June worried and she has vowed to protect her girls and make sure no one takes advantage of them.

June is also determined not to let the fame go to their head.  The only major purchase she has bought is an above ground swimming pool.  June still shops at Walmart and Sugar Bear still works.