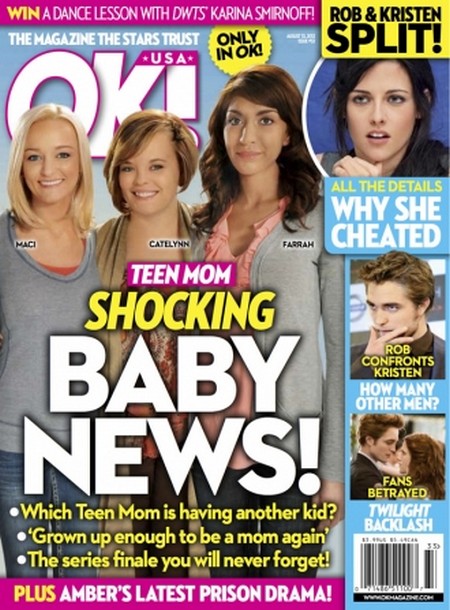 There has been a lot of stuff going on with the cast of Teen Mom this summer.  First Leah Messer and Jeremy Calvert tied the knot and now according to the latest issue of OK Magazine, one of the girls is expecting yet another baby!   Is it Maci Bookout, Catelynn Lowell or Farrah Abraham?  Whoever it is, she’s pretty convinced that now she’s “grown up enough to be a mom again”!

Also in the new issue you can catch up with Amber Portwood and her latest bit of drama.  Don’t forget, she decided a few months ago that a five year prison term was the only sure-fire way to keep herself clean, sober and out of trouble.

Also in the latest issue, Nicole “Snooki” Polizzi is just a few weeks away from bringing her son Lorenzo into the world and OK has all the details on her labor fears and new baby concerns.  Kourtney Kardashian is once again hauling drama king, boyfriend Scott Disick into couples counseling and Jessica Simpson is said to be hitting the gym hard in hopes of fitting into a pair of daisy dukes someday.  Pick up the new issue of OK for more on these stories- and of course the latest on the Kristen Stewart cheating fiasco!  It’s on news stands now.