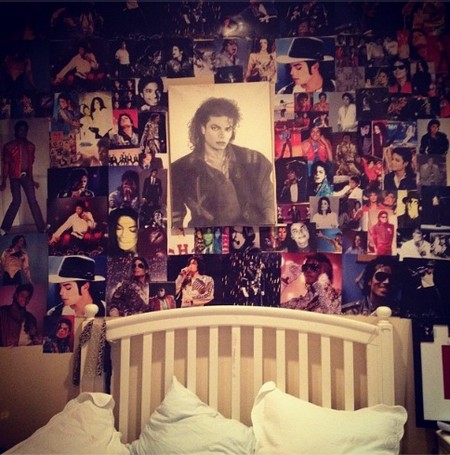 Paris Jackson, 14, tweeted a photo of her bedroom wall on her Instagram account which is a dedication to her father Michael Jackson.  Along with the photo Paris tweeted, “my new wall took me 3 effing hours”

A fan commented on her photo and Paris tweeted again, “someone commented on my pic saying “obsessed much?” yeaa u better believe it .. a whole wall of his pics is the LEAST i could do #dedication“

Paris has been in the new a lot lately with the feud brewing among the Jackson family over Paris’ father Michael’s 1 billion dollar fortune.  The drama got so bad Paris’ grandmother Katherine disappeared for ten days.  Katherine has since been found and things seem a bit calmer at the Jackson compound, at least for now!