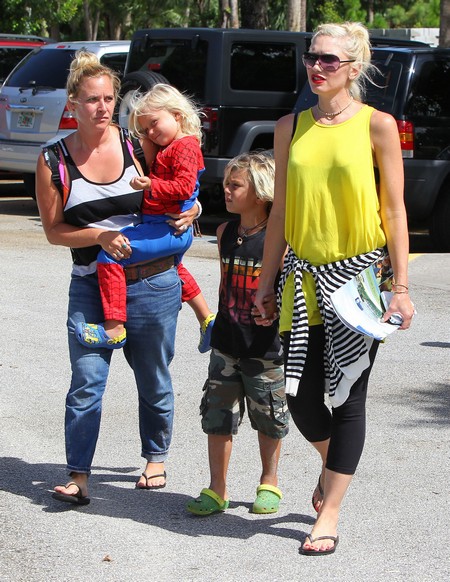 No Doubt singer Gwen Stefani and her husband Bush frontman Gavin Rossdale take their kids Kingston and Zuma to the South Florida Science Museum on August 6, 2012 in Palm Beach, Florida. Zuma was dressed in a cute Spider-Man costume while Kingston showed off his guns in a sleeveless shirt.

Gwen recently spoke about the possibility of her going solo again, she said, “No, I don’t think so. I was always thinking of that as a moment in time and you can never say never. But these last couple of years have been overwhelming for me, with having so much going on, and my husband being on tour, and just trying to do it all, which is not possible.

I guess right now I love to be in the moment. I just feel about a year from now my oldest kid is going to be seven. It just goes so quick, you know?”

Juicy Couture Tee, Sneakers & Disney Sunglasses: If Celeb Moms Have ’em, So Should You!