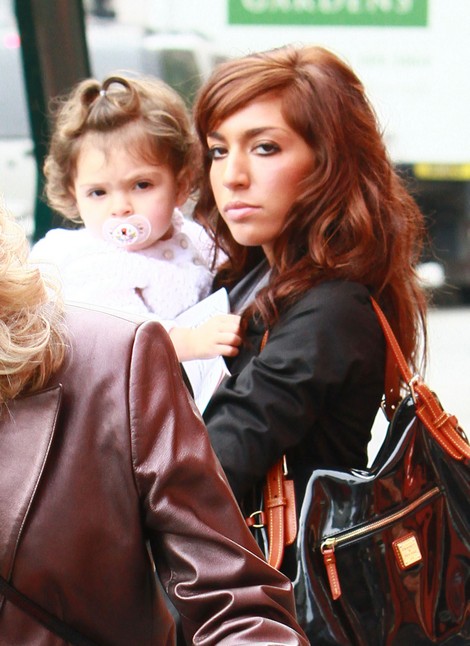 “Teen Mom” star Farrah Abraham is one of the most prolific reality tv “entertainers”. She’s a reality television star, a writer of a hit autobiography and now it seems a music star. Abraham released her single called “Getting up from Rock Bottom” and if you expect rhythmical lyrics and Carrie Underwood-eqsue vocals, you’ll be miserably mistaken.

Celeb Baby Laundry gave the single a listen and we almost ripped our ears off in absolute terror. The single is an auto-tuned and over produced piece of garbage which has been lambasted by critics and fans alike. We use these lyrics as an example of the utter macabre nature of the song:

You want to know the really scary part? Abraham is planning to do more songs. She says it was a therapeutic experience for her to move on from Derek Underwood’s death. Please explain to us what could possibly be therapeutic about this song? It was crafted by Wes Craven.

Abraham revealed, “I have to say that they’ve only heard one song, but then they haven’t heard all of the songs that go with the book.” No! There cannot be possibly more where this came from? Please, please spare us the horror!

She said, “Most people don’t look at it as therapeutic. To me, that was therapeutic. It was also another way for me to express myself. I’m an artist, I’m an entrepreneur. I love to dive in and experience new things now in a positive way.” You call yourself an artist? An artist in what Farrah? Wailing out of tune even though your song is auto-tuned? Dude, not even the Black Eyed Peas can screw that up and they’re the masters of auto-tuning!

Abraham continues, “It is a book track. It is not like a Kanye West soundtrack or an album. The titles of those songs match 10 of the titles in the book, and those are the most important, I would say, times in my life as a teenager, and I thought it was really cool to have the opportunity to record my book because lots of teenagers, myself included, like music sometimes over book reading.”

What!? We’re sorry Farrah, but we never knew that books were made of gibberish? We were always led to believe that “books” contain awesome writing and intelligent plot devices etc.

In the words of Jerry Springer, we leave you with these final thoughts:

I know it’s done/enjoy the moments while I’m in them/and no regrets/still let it flow/yeah, yeah bevy traffic on the highway/my eyes are up, up, up!

Hilary Duff’s Son Luca Is Getting His First Tooth