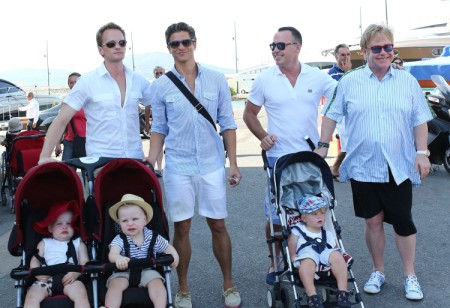 Elton John, his partner David Furnish, and their son Zachary joined fellow vacationers Neil Patrick Harris, David Burtka and their twins sons, Gideon Scott and Harper Grace, for a stroll along the port in Saint-Tropez, France yesterday. Don’t these pics just crack you up? Especially the ones where all the dads are searching in the strollers? Adorable! This vacation is becoming a habit for the two families. People magazine reports the couples joined their blossoming families together this time last year for some rest and relaxation.

Perhaps Elton is asking Neil and David how it feels having two children? The iconic singer just announced that he and David are expecting their second child. The surrogate is reportedly in her first trimester. How do you think Elton and David will do? They look like they’ve got everything under control! They all look so happy and so domestic!