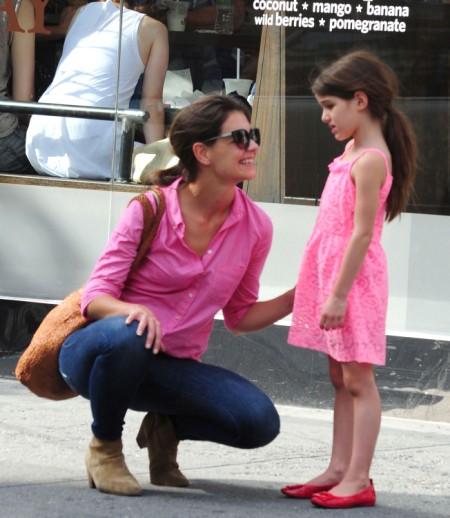 Katie Holmes has enrolled Suri Cruise in a prestigious “world” school that anyone can matriculate in as long as they have $40,000 a year to spend. OK, so I guess it’s not for everyone. The Daily Mail reports The Avenues World School has 20 campuses on five continents so students can switch between the schools without disrupting their education. It’s primarily meant for the children of the “jetsetting elite”. No fair! I want to go!

The six-year-old will be based at the school’s New York campus, just blocks away from where Katie has taken up residence since she split from Tom Cruise. A source told Life & Style magazine Katie has been talking up the school to Suri to make sure the little one is getting excited for her new adventure and not freaked out by all the seemingly endless changes going on in her life. “Katie has eagerly been telling Suri all about the lunchrooms, basketball courts and different activities Avenues offers. Suri’s really excited about it.”

Suri was supposed to attend a Catholic school but Katie changed her mind and thought more globally. The school’s website boasts that it is a better option than normal “local schools”. “If ‘local’ schools are the first step in the evolution of schooling and ‘national’ schools are the second step, the decades ahead are likely to bring the third step: global schools. Thirty years from now there will likely be a number of such organizations. Avenues plans to be the best of this new breed of educational institution – hence its subtitle: The World School.’ Avenues will embrace practical matters so often ignored by academic institutions. Students will become comfortable with a variety of life skills, including practical matters such as time management and technological competency.”

What do you think of Katie’s decision? Should she have stuck to something a little more mainstream since she’s trying to normalize Suri’s life or is this just the school for the child of a celebrity who is prone to travel?