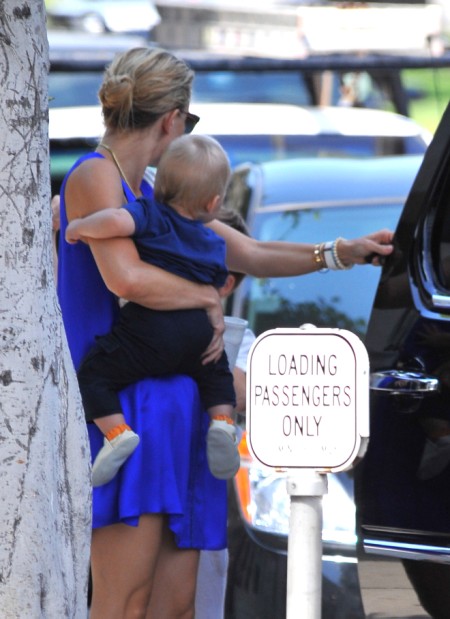 Kate Hudson took her sons, Bingham Bellamy and Ryder Robinson, out to lunch in Brentwood yesterday looking casual and gorgeous in a slinky bright blue dress. The actress is currently stepping away from her mommy duties and filming a multi-episode guest spot on FOX’s Glee alongside the show’s star, Lea Michele.

On Monday, Glee creator Ryan Murphy tweeted a picture of the two chics shooting scenes at the show’s New York Academy of the Dramatic Arts. Hudson will play opposite Michele as Rachel Berry’s dance teacher, Cassandra July. It seems like Kate’s easy going attitude is settling in just fine with the fun cast. Michele tweeted, “Getting ready to watch Kate Hudson sing and dance in a little bit! #whyigetupat5am :)”.

This isn’t the first time Kate’s honed her musical chops. She starred opposite Daniel Day-Lewis in Nine in 2009 to great reviews. What did you think of her performance? I thought she was awesome and so appropriate in her ’60s ensemble! How do you think she’ll do at Glee? I have a feeling she’ll knock it out of the park!