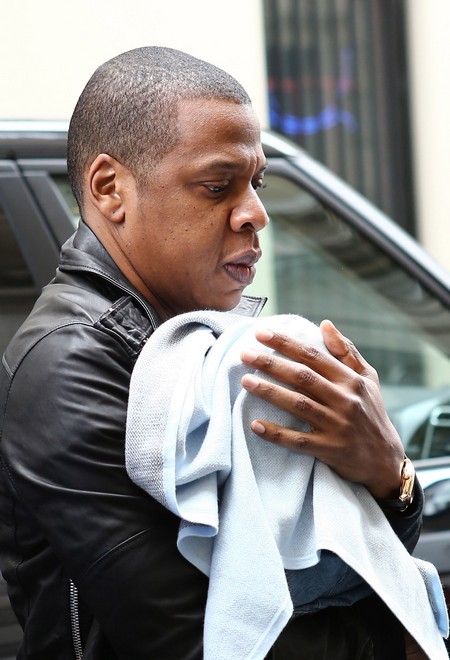 Shortly after Beyonce delivered their first child, Blue Ivy, proud papa Jay-Z dropped a single called Glory that was dedicated to his littlest love.  It was only a matter of time before Jay would drop a few more lines about his daughter and that time would be now.  The song entitled 3 Kings, features Rick Ross, Dr. Dre and Jay-Z and hit airwaves on July 19th.  In it Jay uses his verse to push his six month old daughter up onto a pedestal fit for baby royalty, as he raps,

Not that it’s a shock that he would place his daughter above others.  He has already said that nothing is too good or too expensive for Blue Ivy, as he admitted in a recent interview for OWN.

“At the end of the day, I just know I’ll probably have the worst, spoiled little kid ever,”

Speaking of Blue Ivy, she made an extremely rare public appearance this week with Beyonce.  The duo was spotted out in NYC shopping at Bergdorf Goodman with no huge entourage.  It was just Beyonce with her baby on her hip.

Do you think Blue Ivy will be as spoiled as Jay-Z thinks?  Will she rival Suri Cruise with the public meltdowns and demands?  I’m going to bet not!  Tell us what you think in the comments below!