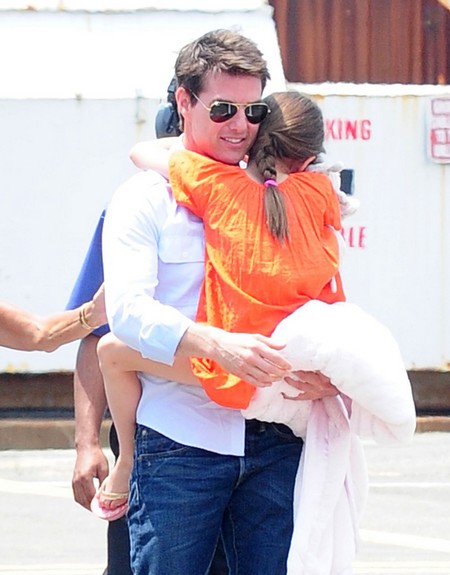 I have noticed for a long time now that Suri Cruise is, more often than not, being carried either by Tom Cruise or Katie Holmes.  The supposedly temperamental 6 year old is often photographed in her parent’s arms dragging either her blanket or elephant.  Most kids by the age of six are adamant about not being babied, but not Suri. Alex Kantif of AKM Images/GSI Media spent a week trailing Katie and Suri and puts this spin on things:

“I stayed in New York for a week, and the only time that the Katie didn’t carry Suri around was when they had to walk five to 10 blocks,” Kantif tells me. “But some of the photographers are being a little over-aggressive and jumping right in front of her with their flahes. So Suri gets a little annoyed, and that’s when she likes Katie to pick her up.

“I don’t think Suri is spoiled,” Kantif insists. “It’s just been overwhelming for her recently, with all the photographers.  It was crazy, sometimes 30—and I think we got to a time where we had about 50 paparazzi, plus TV channels. And some of them got really close.”

Okay, I can see now maybe it’s a protective thing and that makes sense.  But what about before Katie filed for divorce, even then Suri was carried like a small child.  Do you think it’s odd that this kid rarely walks?  What are your thoughts on Suri’s lack of schedule?  We often see her photographed out late at night when most six years olds would be in bed.  It’s rumored that Suri will start first grade this fall in NYC.  I wonder how she’ll react to a normal schedule and having rules to obey!  Tell us your thoughts in the comments below!

Pregnancy Test Dispenser In A Bar?!