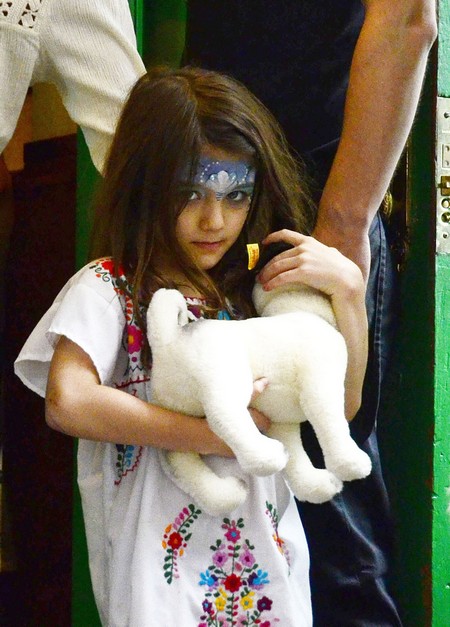 Apparently, Suri Cruise does NOT get everything she demands!  The little diva-in-training was spotted out in NYC with mom, Katie Holmes, throwing a fit because she could not get a live puppy.  According to The Sun U.K. the meltdown happened in the middle of a city street around July 15.  The two were looking at puppies and when Suri realized she couldn’t bring one home, she flipped out.

The situation sparked a debate between media outlets with various voices weighing in.  Some people believe that Suri is going through a rough time and a furry friend could really help her cope.  Others think the child is spoiled rotten and it’s nice to see Katie actually say no and set some limits.

Also tangled in the debate is concern over Suri’s attachment to objects, something common in a much younger child.  Suri is six and is said to be starting first grade in the fall, yet she is often photographed dragging her blanket and carrying her stuffed elephant.  While some professionals have been critical, Dr. Barney Softness, a noted pediatrician on the upper west side sees it this way,

“If you have several homes, you need some consistency, your own little friend you hang with no matter where you are.”

Should Katie have bought Suri the puppy?  Do you think it was just a spur of the moment demand that spun out of control?  Tell us your thoughts in the comments below!