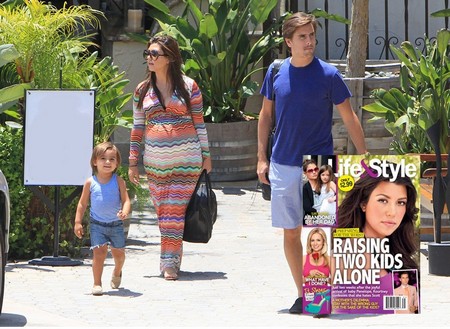 It seems things haven’t been all rosey for Kourtney Kardashian since bringing baby Penelope home two weeks ago.  Aside from recovering from childbirth, adjusting to a newborn and chasing her two year old son, Mason it looks like she’s doing it all alone.  Boyfriend Scott Disick is helping as little as possible and making his usual excuses for his bad behavior.  The new issue of Life & Style Magazine has details.

“Since Kourtney has become a mother, her priorities have changed, and Scott hasn’t shared her love for being a parent,” a source told Life & Style magazine, according to the July 30 issue. “She doesn’t need Scott. Scott is totally out of control and a loose cannon,” a friend told the magazine. “He’s doing whatever he wants to do.  Kourtney doesn’t want Scott’s bad influence on the kids,” the friend said. “She’s just sick of him and his bad behavior, and she’s sort of OK raising the kids alone. She’ll be a single mom.”

Ok, did anyone not see this happening?  If you have kids with shady, party boy Scott Disick you WILL be a single mother because he is not responsible.  It’s impossible to think that Kourtney didn’t see the writing on the wall.  I just have never understood why she chooses to settle for his garbage.  I am sure she certainly can raise her babies on her own and do a great job of it.

Do you think Kourtney is on her way to single parenting?  In day to day life, hasn’t she been one for years anyway?  Tell us your thoughts in the comments below!