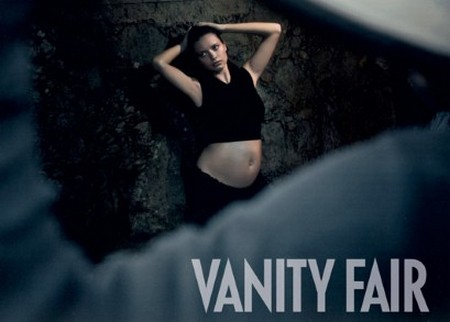 Victoria’s Secret Angel, Adriana Lima has just made a bit of history.  Her very pregnant belly is prominently featured in the 2013 Pirelli calendar.  The 2013 edition of the famed risqué calendar was shot in Brazil in May by acclaimed photojournalist, Steve McCurry.  A few behind-the-scenes photographs on Italian Vanity Fair’s website show Lima posing with her five-month-old baby bump on proud display for the camera.

The calendar is known for its risqué images of models and actresses that usually pose completely nude but this year, McCurry wanted to take things in a bit of a different direction.  As he tells liquida.it, “I want to portray women who are sexy without being naked.”  Obviously he captured the fact that even at 5 months pregnant, Lima was still sexy as ever.  She is the first pregnant woman to be featured without digital enhancement.

Back in March Lima announced her pregnancy, telling People Magazine that she and husband former National Basketball Association player Marko Jaric are expecting a little brother or sister for their two-year-old daughter Valentina.   Lima revealed: “The entire family is very excited, especially Valentina. She keeps blowing kisses to my belly and saying, ‘Kisses for the baby.'”

What do you think of Lima’s photos?  Do they go to far or do they capture the sexiness of pregnancy?  Tell us your thoughts in the comments below!

Adriana Lima Shows Off Bump In A Mini Dress