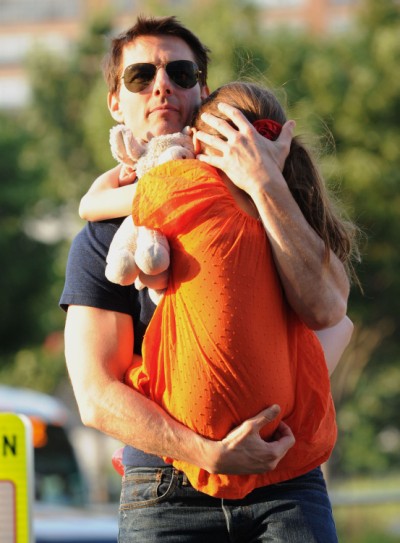 Tom Cruise reunited with his daughter Suri Cruise  yesterday for the first time since Katie Holmes began divorce proceedings last month. Tom just finished shooting his movie, Oblivion, in California and sources close to the actor have said getting back to Suri was his number one priority. Tom spent the afternoon with Suri and even took her to Chelsea Piers for her gymnastics lesson.

Tom kept up a smile for the cameras but people close to the actor say he is still upset and hurt by the separation and subsequent media circus surrounding his family. Tom and Suri must have had a fun day though. The six-year-old looked shattered in Tom’s arms as the two made it back to their hotel. Apparently, Tom and Katie will not see each other while Tom is in NYC. Do you think the parents will be able to bury all this animosity and co-raise Suri in a cordial manner or has too much already been done?