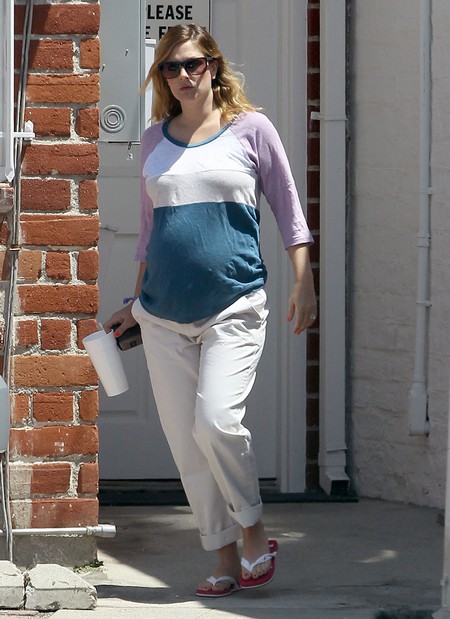 The pregnant Drew Barrymore has been bitten by the Annie Leibovitz bug. She is planning to make her baby an instant media star by making the pink footy the subject of a major pictorial as soon as she leaves the delivery room. Drew, please don’t forget to remove the placenta!

“It’s the biggest production of my life,” Drew told an eager-to-listen-friend.

An insider reveals, “Drew has gotten all sorts of big money offers from magazines to have the infant shot by anyone she wants, but she prefers to do the pictures herself, and her hubby Will Kopelman is in total agreement.”

This isn’t Drew’s first foray into photography. She recently stepped behind the camera to photograph up-and-coming young Hollywood starlets for “V” magazine. Her subjects were as diverse as Victoria Justice of “Zoey 101” fame and “The Hunger Games” co-star Amandla Stenberg.

Drew’s bun in the oven is getting taken out soon to become a little baby pastry and Drew is planning to film the little curly toes with hi-definition camera and film. The insider added, “Drew told a pal, ‘I have so many ideas about different settings in which to picture our baby that I have to write them all down or else I’ll forget them”

Ah, pregnant women are so awesome. They’re like kittens and unicorns and cupcakes made from rainbows. They have little people living inside of them, so that makes them like those television shows we used to watch when we were kids, about the human body and the small people running around attempting to fix things? That show was also horribly dubbed. It might have been French, or Russian, or Japanese…

Drew, we salute you for wanting to make your baby America’s Next Top Model even before birth!