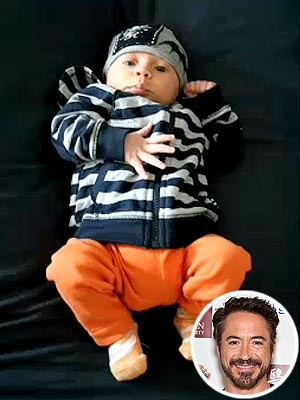 Robert Downey, Jr. made an appearance on last night’s The Tonight Show with Jay Leno, but plugging his new movie, The Avengers, took a quick back seat to showing off his three-month-old son, Exton Elias Downey.

The proud father just couldn’t help himself from flashing a picture. “I have to exercise just a little restraint. I mean, if you want me to, I will.”

“He’s so darn cute, isn’t he?” Downey asked while looking at the 3-month-old in a hoodie and cap.

This isn’t the first time Downey has given away special, private information while on a late show. He spilled the beans to Leno on the sex of the baby back in December. He was worried about what his wife, Susan Levin, was going to say when he got home. “I gotta be careful,” he joked to Leno. “I am gonna have to see my wife some time after doing this segment with you, and I think I’m already in trouble.” I wonder if he was in trouble last night.

Exton is so adorable, isn’t he? He’ll be flying around with his Iron Man toys in no time!