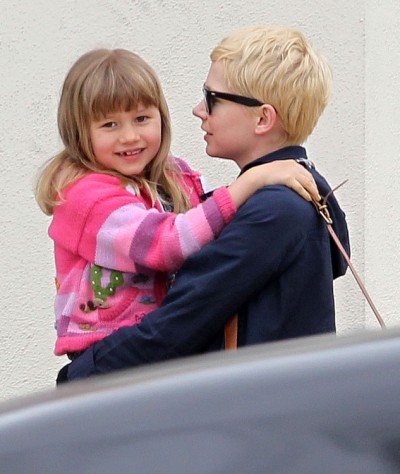 So Michelle Williams and Jason Segel started dating right after the Oscars in February, and apparently, things are still on and going very strong. So strong, in fact, that Jason is spending a lot of time with Williams’ daughter with ex Heath Ledger, Matilda Ledger. According to Us Weekly, friends of The Five Year Engagement star, say Jason is great with kids and creating  a real bond with Matilda.

“I never thought Jason would ever date someone with a kid,” a Segel confidante tells the new issue of Us Weekly. “But he’s taking everything in stride. He’s ready to be a grown-up…. Jason knows how to entertain children. You can’t be that obsessed with puppets and not learn a few things!”

And it seems Matilda is appreciating the effort. A source says Matilda “loves Jason” which can only be good news for Williams who is also quite smitten with her funny man boyfriend.

“She’s fallen for him hard,” a Williams source tells Us. “She’s really giving this a shot.”

I’m glad for the couple, I really am. But it’s making me nervous for Segel. He’s really jumped into this relationship. He’s already mentioned Williams in interviews and was caught with a picture of her taped to his phone. I just don’t want him to get his feelings hurt especially since there is a young child involved. But what do you think? Am I fretting over nothing? Do you think this couple can go the distance?