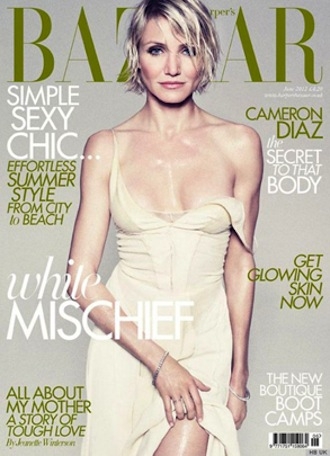 Cameron Diaz had to know the questions would come. She’s starring in a movie called What to Expect When You’re Expecting. She had to know baby questions would be thrown at her left and right. But the 39-year-old is more than candid as she discusses her hopes for having children and her realizations that she might not.

“I’m not sitting there going, ‘Oh, my God, when am I going to get married? When am I going to have a baby?’” the actress tells the June issue of Harper’s Bazaar UK. “I would be remiss if I was living my life wishing I had something other than what I have. If, one day, I am blessed with the experience of having a child, I would be overjoyed, but I am not sitting here feeling empty because I haven’t yet, or that I may not.”

These words come at the heels of a recent interview she gave to InStyle magazine.

“Society definitely puts pressure on women to make them think their lives should go a certain way. I’ve never said I don’t want children—I just haven’t had children yet. I don’t know what’s going to happen in my life! I could end up adopting children. I could end up with a partner who already has children. Who knows? I’m not trying to fit into anyone’s box about how I should be. I just fit in my own box.”

I think she’s handling the questions so well. She isn’t feeding us lines but rather telling the truth. She’s not ruling out kids; she’s just not there yet. Perhaps she’s waiting for the right guy. After ending her relationship to baseball star, Alex Rodriguez, Cameron’s back on the market again. Who knows? Maybe her perfect match is just around the corner or do you think Cameron likes her independence too much to settle?