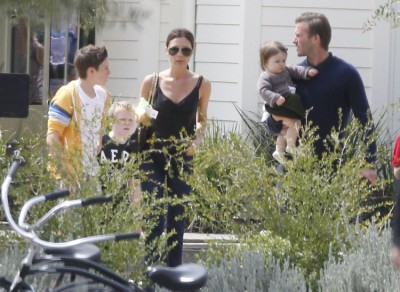 Come on moms, admit it. We’re all a little guilty of this. You’re busy in the morning. You’re frantic. You’ve got millions of things on your mind. You’re trying to find clothes to wear; making lunches; planning your day and you just do it. You forget them. You forget your kids.

It happens to the best of us. And, Victoria Beckham says it even happens to her.

The fashion designer and mother of four told Vanity Fair magazine that she was all the way down the street making a school run in Los Angeles before she realized her oldest son, Brooklyn, wasn’t even in the car!

“I was driving along, talking away, and all of a sudden, I looked down at the seat, and I was like: ‘S**t! S**t! I’ve forgot something’…. Harper was in the car, I was in the car, and we were on the way to school – but we did not have the child who needed to go to school. I got down the road, and literally had to turn and drive straight back.”

I’m not going to be too hard on Victoria on this one. She’s got four kids and one of them is under the age of one. That’s not easy. Take a look at the pics of Victoria and husband, David Beckham, during Easter Weekend with their friend, Gordon Ramsay, and his family in Napa, California. Their life looks busy! I’m tired just looking at the pics!

Don’t be afraid. Let us know. Any funny forgetful moments you want to share?

Baby Time: Jessica Simpson Is In The Hospital