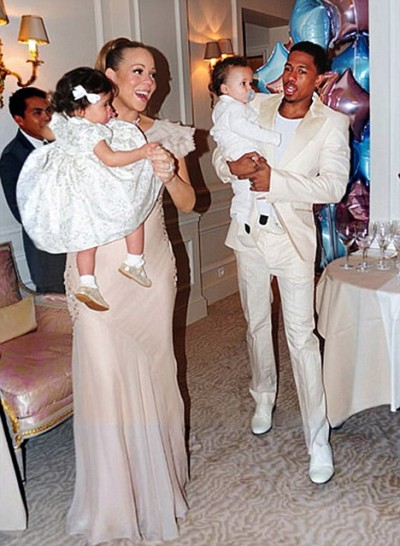 Mariah Carey does everything a little over the top so it’s no surprise the first birthday party for her twins, Monroe and Moroccan, was extravagant to say the least.

Carey, along with husband Nick Cannon, released a photo of the pair holding the birthday boy and girl in a lavish party in Paris.

The party was held at the Plaza Athenee on Sunday and was complete with French pastries, blue and pink star-shaped balloons, toys and confetti.

Monroe donned a white dress with a floral pattern and topped it off with a bow in her hair, while Moroccan matched his father’s sharp white suit. They accessorized with blue and pink pacifiers.

Mariah gave hints that something special was up her sleeves for the special birthday. She was seen doing some power shopping and buying lots of goodies for her twins. She tweeted, “shopping for Roc & Roe’s bday in Paris…Dembabies, dembabies,dembabies!” and later added, “We have put together some very festive plans!”

The trip to Paris was also special because the couple renewed their wedding vows at the Eiffel Tower earlier in the week to celebrate their fourth wedding anniversary.

I want to be a part of the Carey-Cannon family. There’s never a dull day!