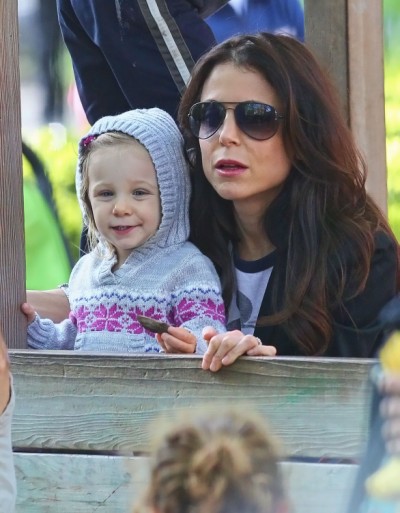 Bethenny Frankel and husband, Jason Hoppy, took a time out from their busy schedules yesterday to take daughter, Bryn Hoppy, to the park in New York City. The super cute tyke didn’t slow down as she ran all over with stuffed baby doll in tow.

It’s nice to see the parents looking so happy especially with all the rumors circulating that a divorce was imminent. But the naysayers aren’t slowing our girl Bethenny down. In addition to her popular Bravo show, Bethenny Ever After, and Skinnygirl products, the mogul is adding to her empire with her first novel, Skinnydipping, which hit stores yesterday.

She told Us weekly, “This was by far the most inspiring and passionate project that I have worked on in my career. It felt like the book was writing itself. People will devour it like a decadent box of chocolates!”

I have no doubt the book will be a hit. It seems everything Bethenny touches lately turns to gold, or should I say, chocolate!