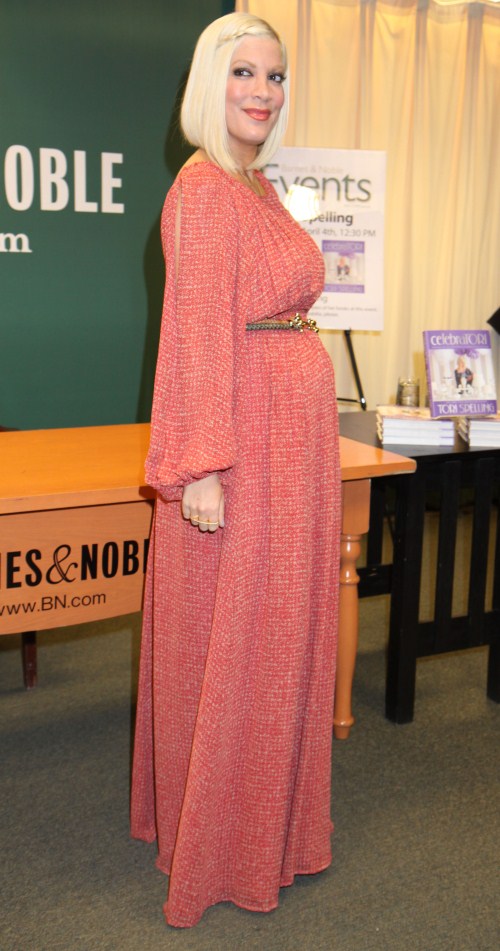 Tori Spelling who is expecting her fourth child just five-months after giving birth to daughter Hattie admits the news was a surprise.

“All my friends keep asking me [if it was planned] and I’m like, ‘Seriously? Hattie was one month old. Do you think it was planned?'” Spelling t0ld at her CelabraTori book launch at Barnes & Noble in New York City, NY Tuesday.

“I was up all night with feedings.”

“The doctor said, ‘Wait six weeks [to have sex],’ and Dean was like, ‘They tell everyone that.’ We didn’t wait that long with Stella or Liam. I was like, ‘Well, I don’t want him to think that the sex is going downhill,’ so now we’re on baby No. 4,” she added.

The Oxygen reality star joked that daughter Hattie “had a lot to say” about getting a younger sibling. “She was up in arms. She tossed that paci right out the door. Furious.”

Spelling’s older children Liam and Stella didn’t really have a reaction about the news of another sibling.

“It was as if we had said, ‘Oh we got milk today. We brought home milk today and put it in the fridge and you can go help yourself to a glass.'”

What do you think of Spelling being pregnant so soon after giving birth to her daughter Hattie?