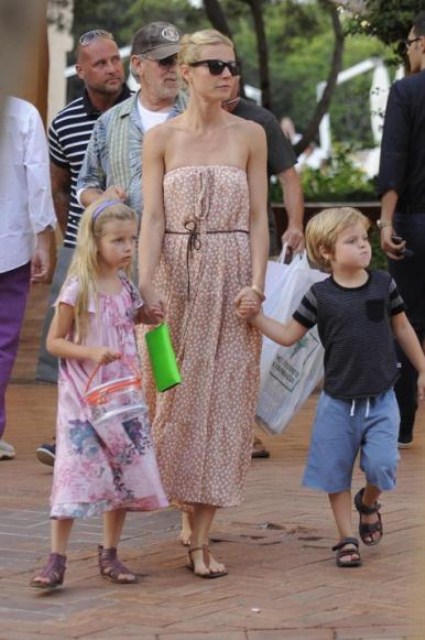 Gwyneth Paltrow‘s two kids are going to be multilingual. They can already speak Spanish…now the Oscar winner has enrolled the pair in French classes. Husband Chris Martin is also learning the language. So it’s a family affair – or should I say an Affaire de famille.

Gwyn’s Mom Blythe Danner – best known for playing the Mother in the Meet The Parents movies – let the cat out of the bag regarding the language lessons when she spoke to The Sun newspaper in London. ‘My daughter’s doing a film in Spain now, because she’s fluent in Spanish. I’m delighted. The children are fluent in Spanish too, so the whole family is now learning French. Gwyneth is the quickest learner I’ve ever met in my life‘

So seven year old Apple Martin and six year old Moses Martin are busy learning another language to add to their growing collection. I wonder if Gynweth got the idea from her friend Madonna. The Material Girl’s eldest daughter Lourdes Leon was fluent in French by the time she turned 10. It wouldn’t be the first time she’s been influenced by the singing superstar.

Speaking French will come in handy for Apple and Moses. The Martin family spends a lot of time in Europe. Gwyneth once said ‘I’ve had a very interesting career. I get to do amazing things and work with amazing people and travel and learn languages – things most people don’t get the opportunity to do‘. And she’s making sure her children soak up all the experiences along the way. What an amazing education.

Kellie Pickler: “You Get Married and Everyone Is Trying To Make You Have Babies”