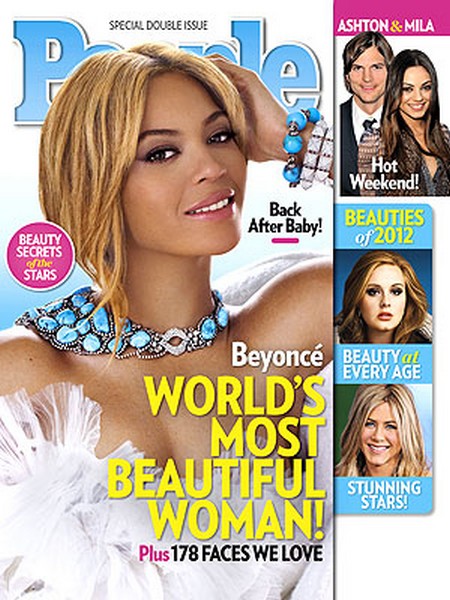 People Magazine has released it’s 2012 World’s Most Beautiful Woman list and Beyoncé is on the top of the list.  The magazine says that after giving birth to her daughter Blue Ivy Carter,  Beyoncé is back.

People has the scoop:“I feel more beautiful than I’ve ever felt because I’ve given birth,” says PEOPLE’s 2012 World’s Most Beautiful Woman. “I have never felt so connected, never felt like I had such a purpose on this earth.” The “Crazy in Love” singer, 30, and her husband of four years, Jay-Z, 42, have gone gaga for Blue, born Jan. 7 in New York City. “She’s just the cutest thing,” gushes Beyoncé, who croons one-of-a-kind tunes to her daughter and professes to “love” changing diapers.

Beyoncé dishes about her beauty secrets and in her first interview since giving birth to Blue Ivy she talks about her daughter, losing weight and she puts all the rumors to rest.  People also features timeless beauties, celebrities who take no makeup in stride and anti-aging secrets.  A not to be missed issue!

Scott Disick is Nervous About Raising A Daughter